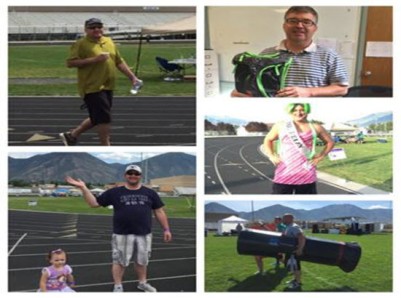 Every year, McWane Ductile-Utah (MDU) team members participate in fundraising for the American Cancer Society Nebo Relay for Life. In fact, they are the biggest fundraising team for the event, and this year was their most successful year so far!

MDU had over 75 team members and their families participate on the day of the relay! They held a raffle for the number of laps walked, and Rick Garcia from Maintenance was the grand prize winner of a paid day off. Rick was elated and said, “I will be using this paid day off to go with my 17 year old daughter Valerie when she gets her port taken out.” Valerie has Hodgkins Lymphoma and MDU is happy to support Rick in being able to spend the day with his daughter. Casting Department Head Richard Simmons won Mr. Relay and Melting Department Head Nathan Thayne won the prize for the most unique boxcar, the Scrap Mobile.

We are proud to report that MDU donated about $23,500 this year! As always, they had a lot of fun and are looking forward to next year’s event.

The night of Friday, June 21, was a special night for 40 Pacific States team members who showed up to support their Relay for Life team and walk the track. They raised over $22,300 over several months prior to the event, and walked more than 141 miles that night!

The Pac States team was also mentioned in an article in the Daily Herald:
Pacific States Cast Iron Pipe, based in Provo, had a large team on hand and presented a large donation to the event’s organizers. Jessica Stones, a human resources manager for the company, said they got involved after their general manager John Balian passed away from cancer three years ago.

“We just wanted to do something to honor him and to help the cause,” Stones said. For the last three years the company has organized a charity golf tournament and donated that money to Relay for Life. This year they raised $17,000 from the tournament and threw in $5,000 of their own, plus a little bit more from other fundraising efforts. “Today we’re at 22 [thousand] and change. Hoping to raise a little more tonight,” Stones said. “We’re just happy to be here. It’s a great cause.”

Congratulations to all the Pac States team members that helped raise money for Relay for Life this year in honor of John Balian!