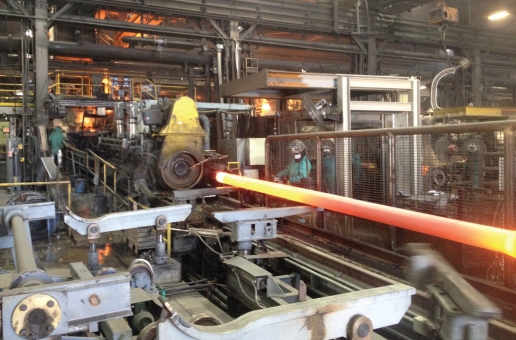 On January 7, a new, state of the art pipe casting machine began production at Pacific States! This new machine is faster than the older casting machine at Pac States and has two troughs, automatic core setting, and automatic pipe extraction.

When Pacific States installed the casting machine in the first quarter of 2014, the facility didn’t simply upgrade technology—it secured a way to produce more quality, uniform pipes with fewer resources.

As usual, there’s a lot going on at Pac States and, as usual, they’re making a difference for the better! The new casting machine—affectionately known as “Casting Machine A”—replaces two machines. Running at full capacity, it will produce approximately twice as much pipe as earlier machines and produce pipe with far more consistent wall thicknesses, thanks in part to Casting Machine A’s own hydraulic system that reduces fluctuations. The machine will be used primarily for 6”-12” pipe. This is also the first pipe machine of its kind in the McWane Ductile Pipe Group.

Congrats to the whole team at Pac States for taking charge and making a difference in 2014!

Comments Off on Pacific States: Cleaner and Even More Efficient